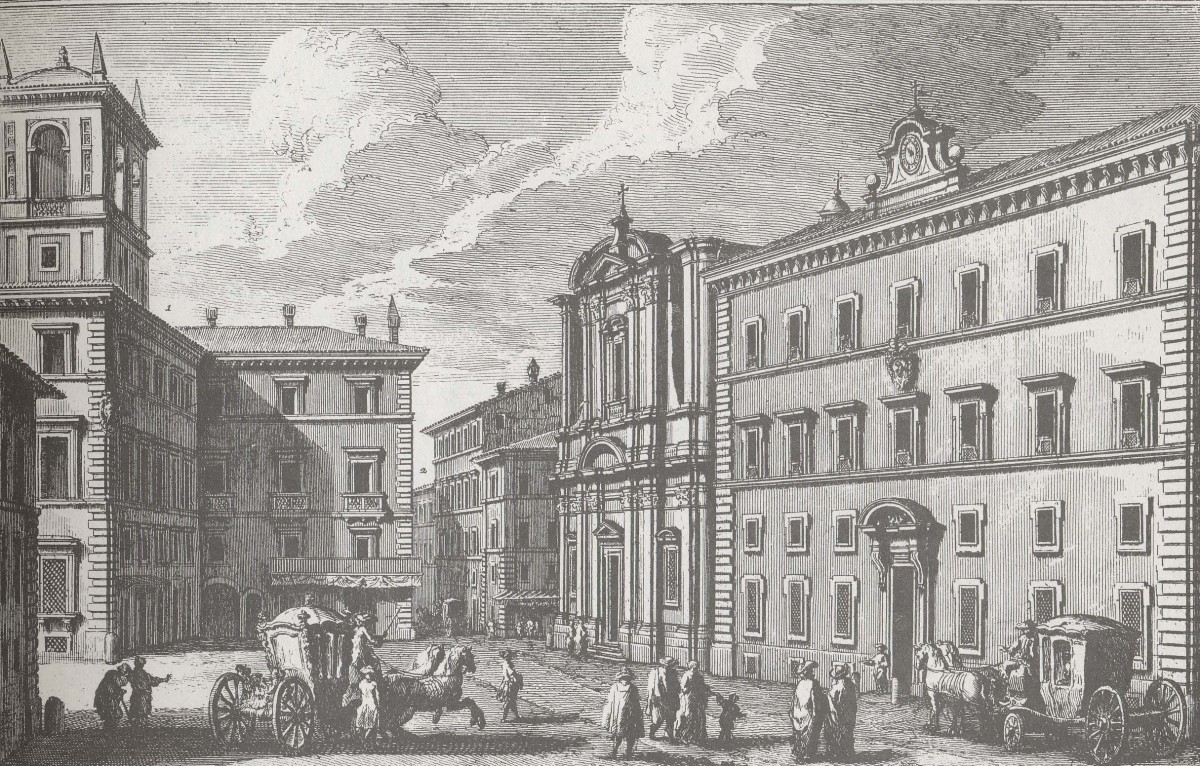 From the XIV to the XVI century, the Palace of St. Apollinare was home to many cardinals, including Napoleon Orsini (around 1308), Pietro di Luna (later anti-pope Benedict XIII, 1394-1423), Branda Castiglioni, and William of Estouteville.

In 1495, the Seneschal Belcari lived there as well.

In January of 1574, Gregory XIII granted the property to the Jesuits as the seat of the Germanic College (later in 1580, it united with the Hungarian College). They maintained the complex (palace and basilica) until 1773.

Among the College's various formative activities, music was given particular attention, thus giving birth to a solid musical tradition.

During the French occupation, a decree issued by Napoleon I in 1811 relocated the schools of St. Luke's Academy to the Palace. In 1825, Leone XII transferred these same schools to the Sapienza and assigned the property to the Pontifical Roman Seminary, which was also the home of the Vicar Cardinal. Later in 1849, during the Roman Republic, the Apollinare was briefly the seat of the Minister of Finances.

In 1853 Pius IX constructed the vast lecture hall above the Basilica--now the Card. J. Höffner Hall--and added two floors to the building for the use of the Pius Seminary which he had founded. He later transferred the Roman and Pius Seminaries to the Lateran in 1913.

From that date until 1920, the Lazarist (Vincentian) Fathers settled in the Palace. Their own home on Via della Missione had been demolished to build the Montecitorio Palace, also known as the seat of Italian Parliament.

Benedict XV made the Palace the seat of the Pontifical Institute of St. Apollinare.  At this center, in different moments of its history, Eugenio Pacelli (the future Pius XII) and Angelo Roncalli (future John XXIII) completed their studies.

In more recent history, the Music Academy "Tommaso da Vittoria," the Circle of St. Peter, the White Fathers (Missionaries to Africa) and other prestigious ecclesiastical institutions have been located in the Palace.

Since 1990, the Palace has been the seat of the Pontifical University of the Holy Cross.

From the architectural point of view, the complex existing today is the fruit of various interventions and expansions that came with the passing of time and the changes in activity. It was reconstructed in great part by the Architect Ferdinando Fuga as work on the Church was being completed. His work also included the adjacent palace, united by an overpass above Via Sant'Agostino. On top of the Palace's facade is a clock with ring tones from three different sized bells: the largest dates back to 1722; the other two, to 1575.

On the ceiling of the Germanic-Hungarian College's ancient library, which was later transformed into the Chapel on the Palace's first floor, there are tempera paintings of the Coronation of Mary and of the Immaculate Conception attributed to Andrea Pozzo.